Per Wikipedia:
The Day of the Dead (Día de los Muertos in Spanish) is a holiday celebrated mainly in Mexico and by people of Mexican heritage (and others) living in the United States and Canada. The holiday focuses on gatherings of family and friends to pray for and remember friends and relatives who have died. The celebration occurs on the 1st and 2nd of November, in connection with the Catholic holy days of All Saints' Day and All Souls' Day which take place on those days. Traditions include building private altars honoring the deceased, using sugar skulls, marigolds, and the favorite foods and beverages of the departed, and visiting graves with these as gifts.

Scholars trace the origins of the modern holiday to indigenous observances dating back thousands of years, and to an Aztec festival dedicated to a goddess called Mictecacihuatl (known in English as "The Lady of the Dead").

So off to see it for ourselves.
But first, let's eat.
Made a crockpot of hurricane chili to feed Dave, Kellie, Jim and me.
Had a couple of glasses of wine and some people (not me) had a little splash of tequila in honor of this day.
I wore the necklace my sister, Geelizzie made with the picture of our sister, Donna in honor of her.

Walked up the eight blocks or so to the Teatro de la Ciudad.
Lots of people were out on the streets in front of their houses.
We heard music!
We are getting closer!
Oops, nope.
That's some garage band practicing in their garage...
Onward to the theatre and heard music again!
Great lighting, great shrines, interesting music, two stages set up so one band or group of musicians could be setting up while someone else was playing ~ smart!
But no beer...

Checked out the shrines first. 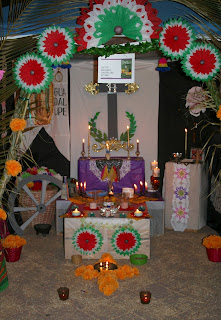 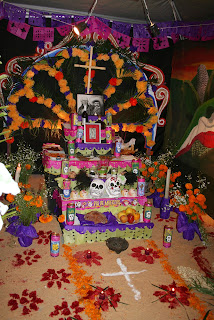 The insurance agent in me had a bit of concern with the number of burning candles...
Lots of tents, paper flowers, paper decorations, people.
This would never fly in the US... 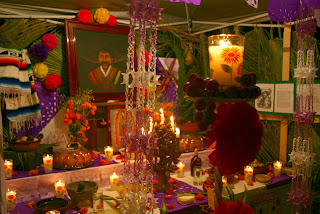 There was a huge shrine behind the stage with giant skulls, flowers, candles and skeletons. 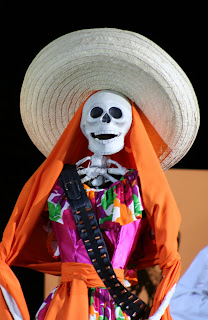 Still no beer.
So, Jim who hadn't had a beer in a few days really wanted one.
Hey there's an Oxxo (Mexican version of a 7-11) a few blocks away.
Let's go buy a beer!
So we walked to Oxxo and ended up with wine coolers.
Even Jim.
Go figure.
And since we are buying one, we may as well get two each, so we don't have to walk back to Oxxo a second time.
More wine coolers.
Mine was Boone's.
Yes, Boone's Farm.

Then we sat on a wall and drank them.
We felt 17.
If you are in your late 40's and want to feel young again, go buy some cheap wine, find a wall, sit and drink. 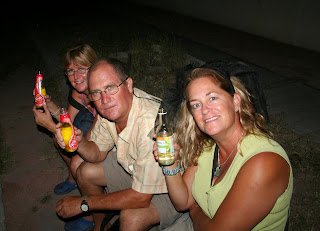 Then back to the festival to listen to more music.

Steve from "Etosha" (a boat in the marina) played the mandolin. 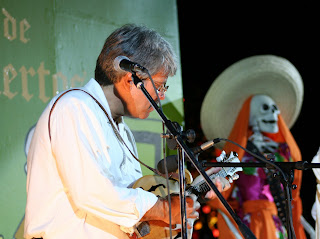 Then we saw these giant stilt-walking skeletons! 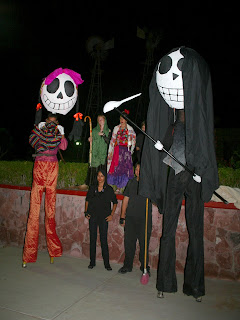 Some of the kids were dressed up.

Then back to The Malecon where a lot of people were dressed up! 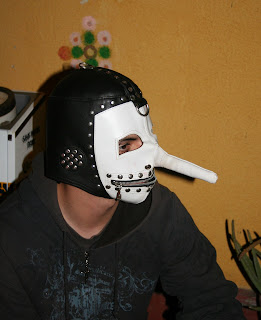 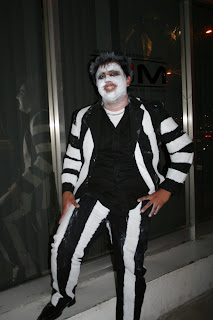 And it's happening all over again tonight!
Posted by Jim and Heather on Meerkat at 10:14 AM

You people seem to be having wayyyyy tooo much fun down there. Keep it up ! I on the other hand, I HAVE to go to the BVI this week just to decompress from the outcome of the election ? not really :-) Just time for another flotilla in that "other" paradise.

Looked like great fun. Day of the Dead is a wonderful celebration of loved ones. The Mexicans sure do a lot of things right down there.

Oh, Heather, I am so jealous! Both Kirby and I miss Mexico so much and some of your experiences and pictures are of the Mexico that we miss - sometimes we worry that it is gone forever - just a memory - so thank you for letting us hang on to the dream just a little bit longer.

And I had to remember sitting on the cement (wall? curb?) watching the basketball game on our road trip. What was the name of that town? It was where we saw the dead chipmonk in the shop window for Ray, and the restaurant invited us to the kitchen to wash our hands before they fed us! And I think it was the same place that I made that great little bar in our motel room (where you AGAIN didn't have hot water in YOUR shower!) Ah, the memories!! Think I am getting Old!???

Tell you friend with the mandolin we have a couple A5s like his, Jody even has some for sale. He's hoping to make a composite Mandolin just for people on boats.